Last night Derek Ure recalled Iain Ure from his loan period at Blackburn United. Iain went out on loan initially until the end of the season but the gaffer as decided to recall Iain so he is available for our remaining games and the Lowland League cup. 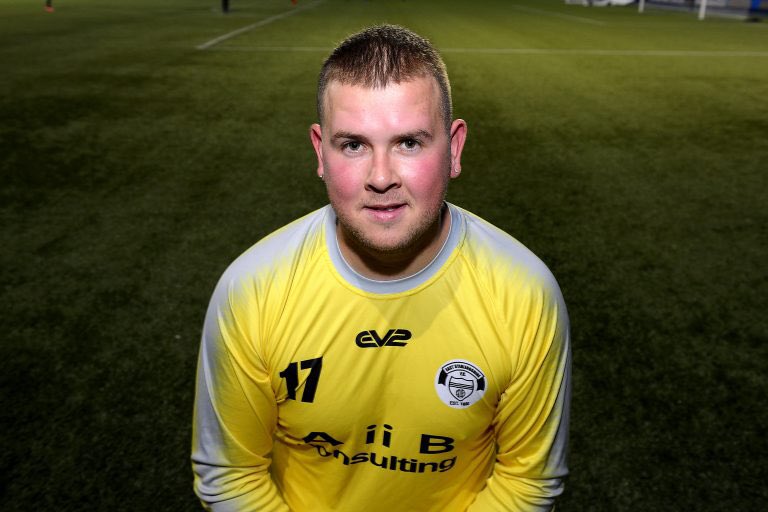 The Soccer Store will also supply any future training equipment, which will be used by our first team as we hope to continue our push up the Lowland League table.

Jack Hart from The Soccer Store stated, “We are pleased to form this new relationship with East Stirlingshire and we hope the two Samba Football Goals we have provided will have a positive impact on the training sessions and performance of the team on a match day.”

East Stirlingshire FC Interim Chairman, Bill Sharp, said, “The club are pleased to have entered into a partnership with The Soccer Store. We are sure that the football equipment provided will go down well in particular with the managent team and players. Derek Ure had already approached the board about purchasing equipment for next season, so it’s been good that we can support him and develop this relationship.”

The Soccer Store have been one of the leading online suppliers of Football Equipment, Footballs and Samba Football Nets for the past 15 years. Although they are a family run business based in Cheshire, they have supplied teams at all levels throughout the UK from Grass Roots level all the way up to the Premier League.

Their full range of Football Equipment, Footballs and Samba Football Nets are available at The Soccer Store.

It’s that time of the year again and we would love you to join us at this year’s Independent Asbestos Player of the year awards (or the Connor Greene awards as they are better known).

This year the event takes place after our last home league match v The Spartans on 13th April 8pm start in the Westfield Bar, Falkirk Stadium.

Tickets are available for £12.50 and this includes a two course meal and entertainment afterwards from our friends Sound Cradle. Tickets are limited to 150 of which half have already sold.

Please speak to Scott Greenaway or Bill Sharp for tickets for what promises to be another great night.

A special thanks goes to Charles McLaughlin for helping our chairman/Chaplin Bill Sharp with Friday night’s 100 club March cash draw which saw Charlie McKechnie pick up the £150 top prize.

Charlie has very generously donated the money straight back to the club again. As this is the second time Charlie has given his prize back to the club this season we are going to reward him by presenting him with a Shire gnome at our next home game.

We would also like to thank young Jamie Greenaway for stepping in to cover Scott Greenaway’s absence in connection with the draw.

‪Everyone at the club wishes the big man all the best, over the last few months he has brought smiles to many faces around the club and we are sure he returns to France with some new words in his vocabulary as well.

East Stirlingshire’s Board of Directors have secured significant backing for a player’s budget next season as they look to push for a return to the SPFL after their historic relegation in 2016.

After a season plagued with inconsistency and managerial change the board, in recent months, have added international businessman Harry Bell, Asian business associate Sherman Lam, Local businessman and Shire fan Bob Worgan and Falkirk based bookkeeping firm owner David McCready to the Board of Directors.

The club are grateful to Harry Bell a lifelong investor in Shire, who has worked particularly hard over the past two years to secure this major investment.

The move will ensure Derek Ure and Andy Rodgers have the necessary funding to build not only a title winning squad for next season, but one that can realistically return the club to the SPFL.

Despite their difficulties in recent years the club have never waned in their ambition to return to the SPFL amid constant speculation that the club wouldn’t survive the challenging financial constraints relegation brought with it.

It is hoped that the funding will also buck a worrying trend for Shire that has saw them finish second and fourth having struggled to adapt to the demands of the Lowland League.

This season hasn’t fared any better for Shire. Nine losses in the league, more than the past two seasons combined, have left them 30 points adrift of leaders East Kilbride in sixth place-stats that are hardly indicative of a side with title ambitions.

However, Shire’s recent purple patch, which has saw them go seven unbeaten, has demonstrated not only the current underachievement of the team but also the potential of a club still yearning to be amongst the 42 elite clubs in the SPFL.

Shire’s return to their ‘spiritual home’ in Falkirk, made possible by partnering with Falkirk FC, may not have translated to instant success on the pitch but it has provided a vital platform for the club to reassess and plan for the future.

While Ure and Rodgers continue to assess the current squad and its capabilities they have also been active in targeting and securing players for next season, although the club is yet to reveal any details as to who they have been watching.

Shire have also announced plans to run a reserve team for next season in an effort to increase the squad size and intensify competition for places.

Shire’s announcement is sure to renew optimism among fans as they prepare to embark on a fourth season watching their side play in the Lowland League.

Captain Jamie Barclay’s appearance in goals for the Shire against Gala Fairydean Rovers at the weekend was his 150th competitive game for the club. Jamie is currently in his 2nd spell at the Shire having originally played with us in seasons 2008/09 and 2009/10.

Well done Jamie in reaching both these club milestones !

Connor Greene’s 23rd goal for the Shire on Saturday against Gala Fairydean Rovers broke the club’s all-time scoring record for a defender, a record he had previously jointly held with Jimmy C. Johnstone (1894/95 to 1904/05).

Connor has made no secret that he has been after the Shire’s all-time record total of goals scored by a Shire defender and we are delighted that he has achieved this milestone in what was his 188th game for the club.

Look out for a very Important announcement no Shire fan will want to miss @ 1pm tomorrow (Tuesday).

The club have had confirmation that Andy Rodgers received two red cards on Saturday v Bonnyrigg Rose.
Andy was initially given 2 yellow cards resulting in his first red and he also received a straight red for his involvement in the incident as he left the park. Subsequently Andy has also been reported to the compliance officer who may take further action.

This has resulted in Andy incurring a 2 match South Challenge cup ban which will carry over until next season and he has also received a 1 match ban that will rule him out of our match in the league against Vale of Leithen in 3 weeks time.

The club and Andy will not be appealing any of the above.